In my Bachelor of Engineering senior capstone, my team was tasked with analyzing the feasibility of a biomass heating plant to help Dartmouth reach its carbon emissions targets, as well as developing a new heating system for the Dartmouth campus. For some context, in 2017, Dartmouth introduced two carbon emission goals: a 50% reduction in emissions by 2025 (from 2010 baseline), and 80% reduction by 2050. However, at its current rate of emissions, the college will not meet these goals.
In January 2019, Dartmouth announced plans to build a biomass heating plant that uses locally sourced forest residue as a pathway to meet its emission goals. From schools such as Middlebury College, to government entities like the United Nations, biomass is often considered a carbon-neutral energy source. However, while biomass does not introduce new carbon into the atmosphere, biogenic fuels are less energy dense than their fossil-fuel counterparts and actually emit more carbon during combustion. The graph on the bottom right illustrates how biogenic fuels (wood pellets, wood chips, biocrude), burned in 2020 have increased emissions for at least 25 years when compared to biodiesel or no. 6 fuel oil. Dartmouth currently burns no. 6 fuel oil to heat the campus and while inexpensive, this fuel oil (also known as residual oil) is by far the dirtiest and most polluting of existing fuel products. As promising as the biomass plant may appear on paper, with less than a decade left to limit global warming to 1.5°C, natural sequestration for biogenic fuels will not offset emissions on a time scale that is relevant for addressing climate change.
Biogenic carbon needs time.
Dartmouth needs a new framework. 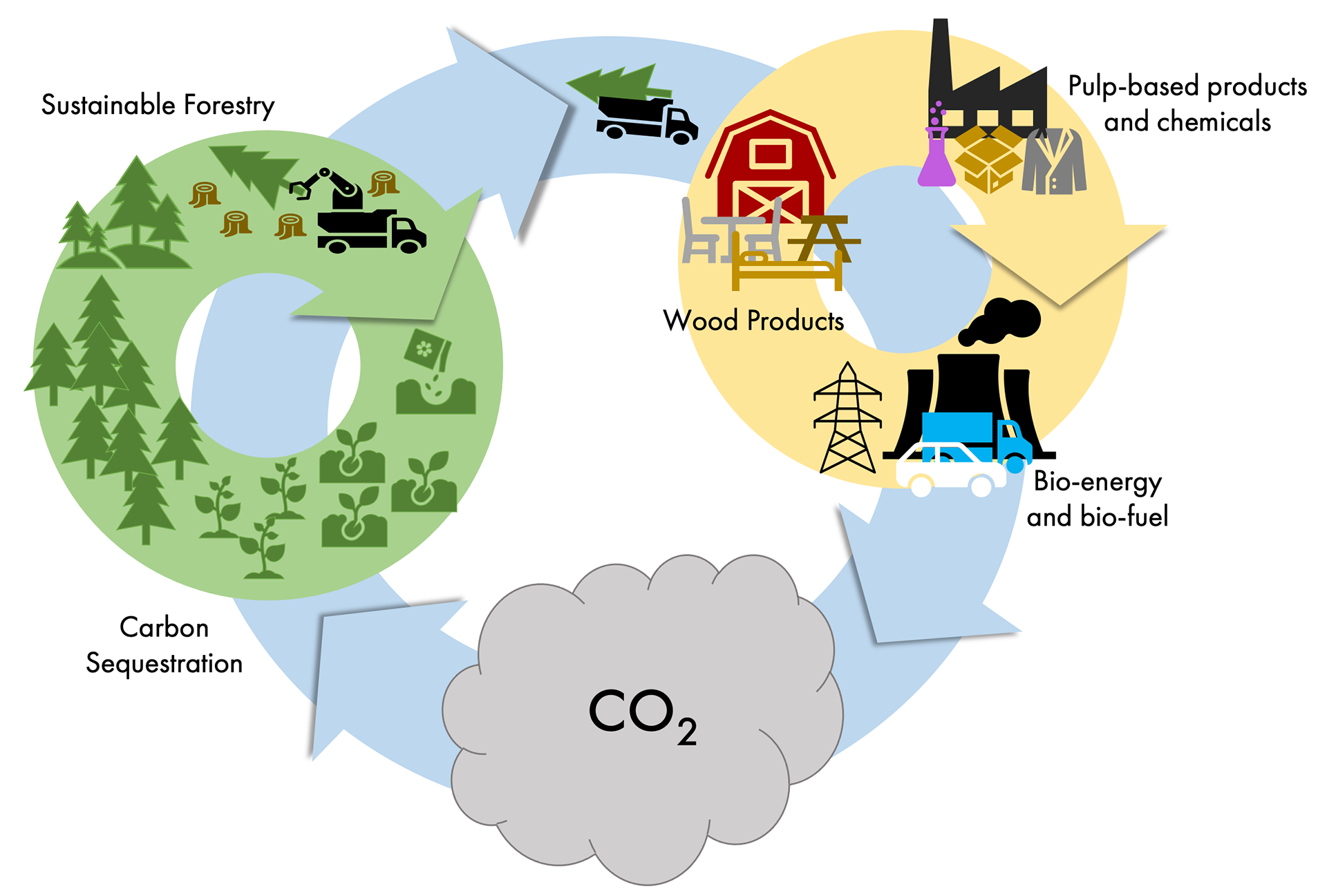 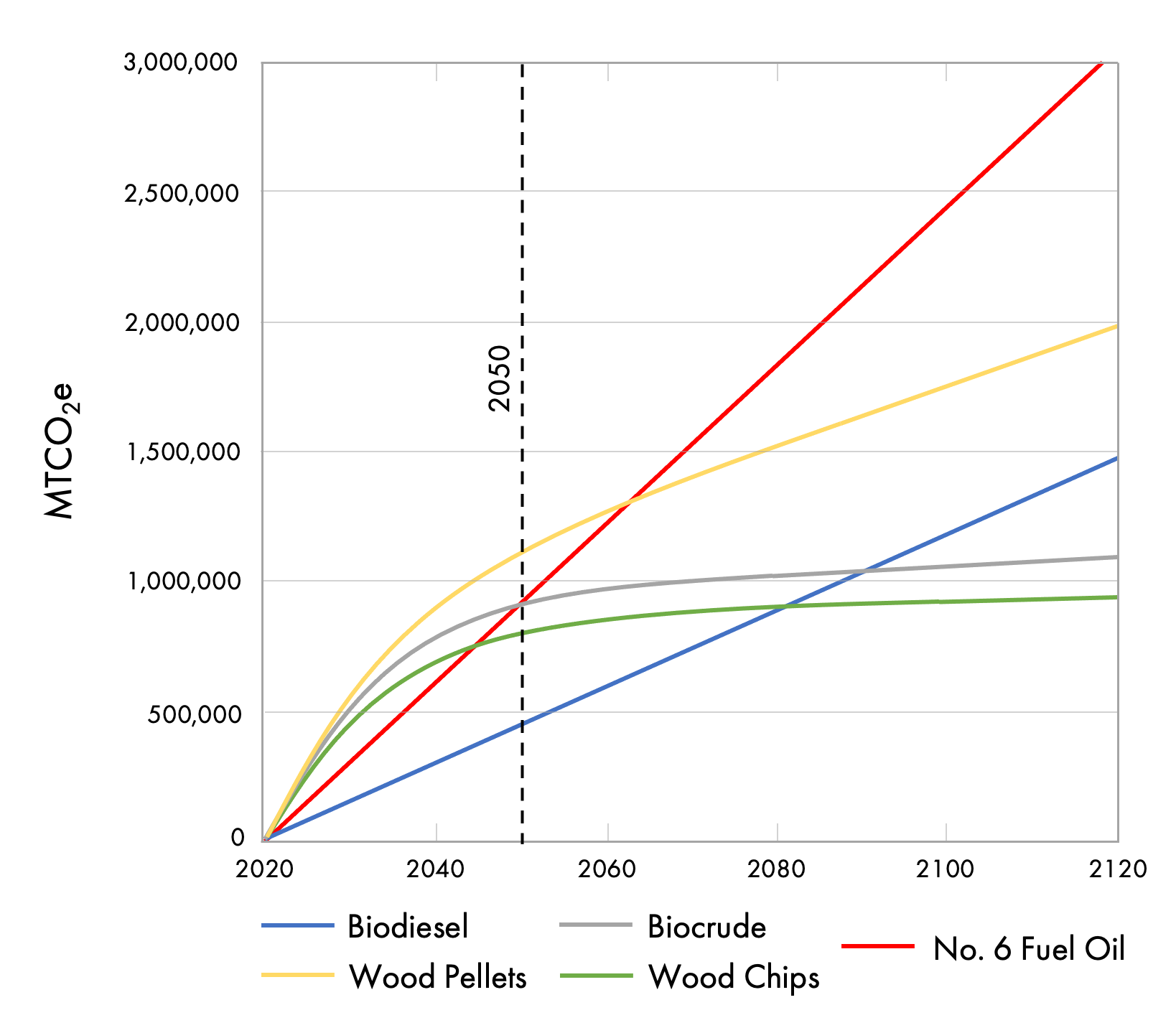 I researched ground-source heat pumps (GSHPs) which use the steady temperature of the earth to provide seasonal heating and cooling. With diagrams below show the seasonal heating and cooling difference, as well as how borehole thermal storage works. The analysis included creating models of how the seasonal coefficient-of-performance would change based on Dartmouth's regional thermal imbalance; because of greater heat extraction in the winter, in the summer heat-recovery chillers (HRCs) and solar-thermal arrays are used to reject additional heat into the ground. Essentially the GSHP boreholes act like a battery, storing thermal energy. 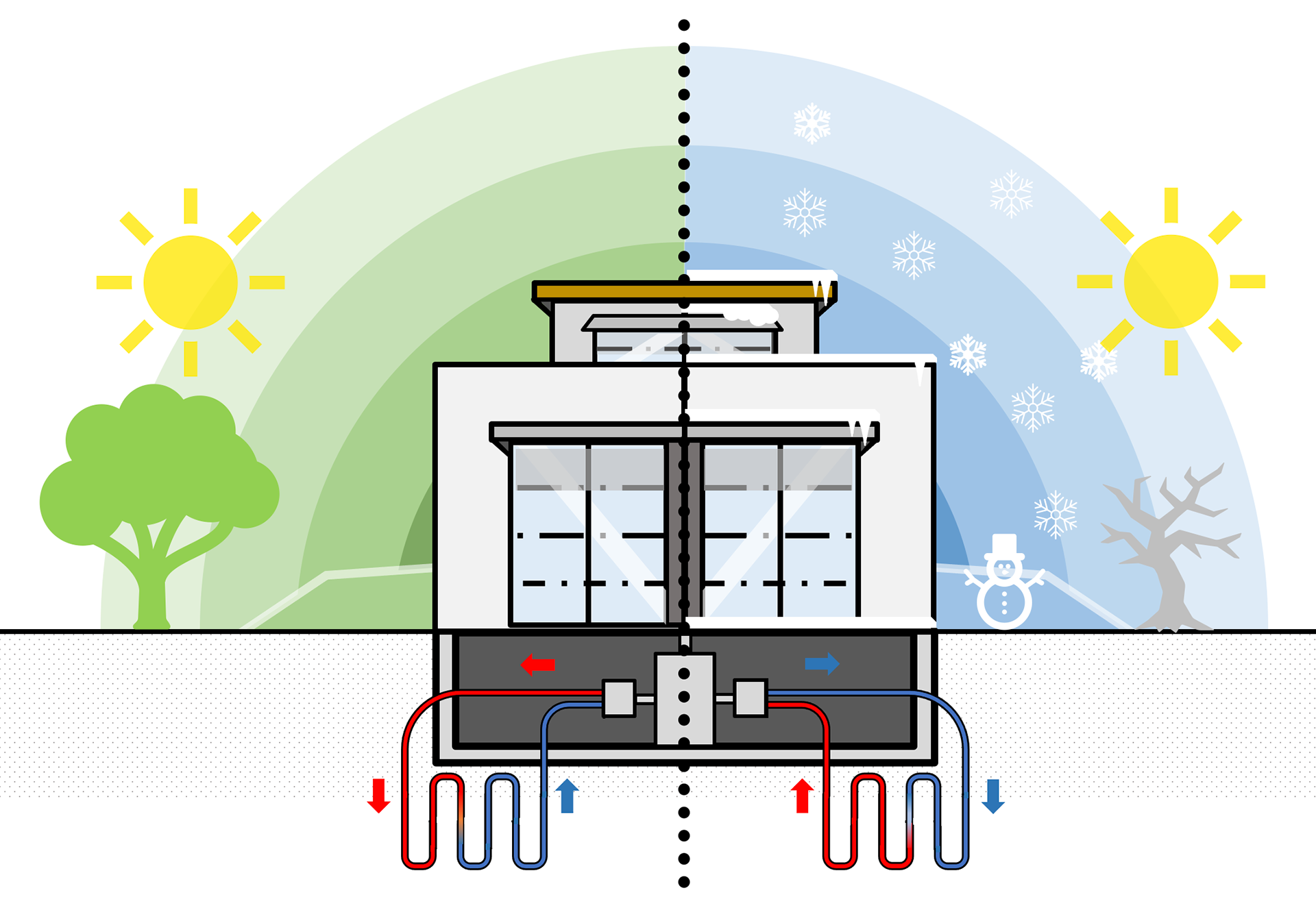 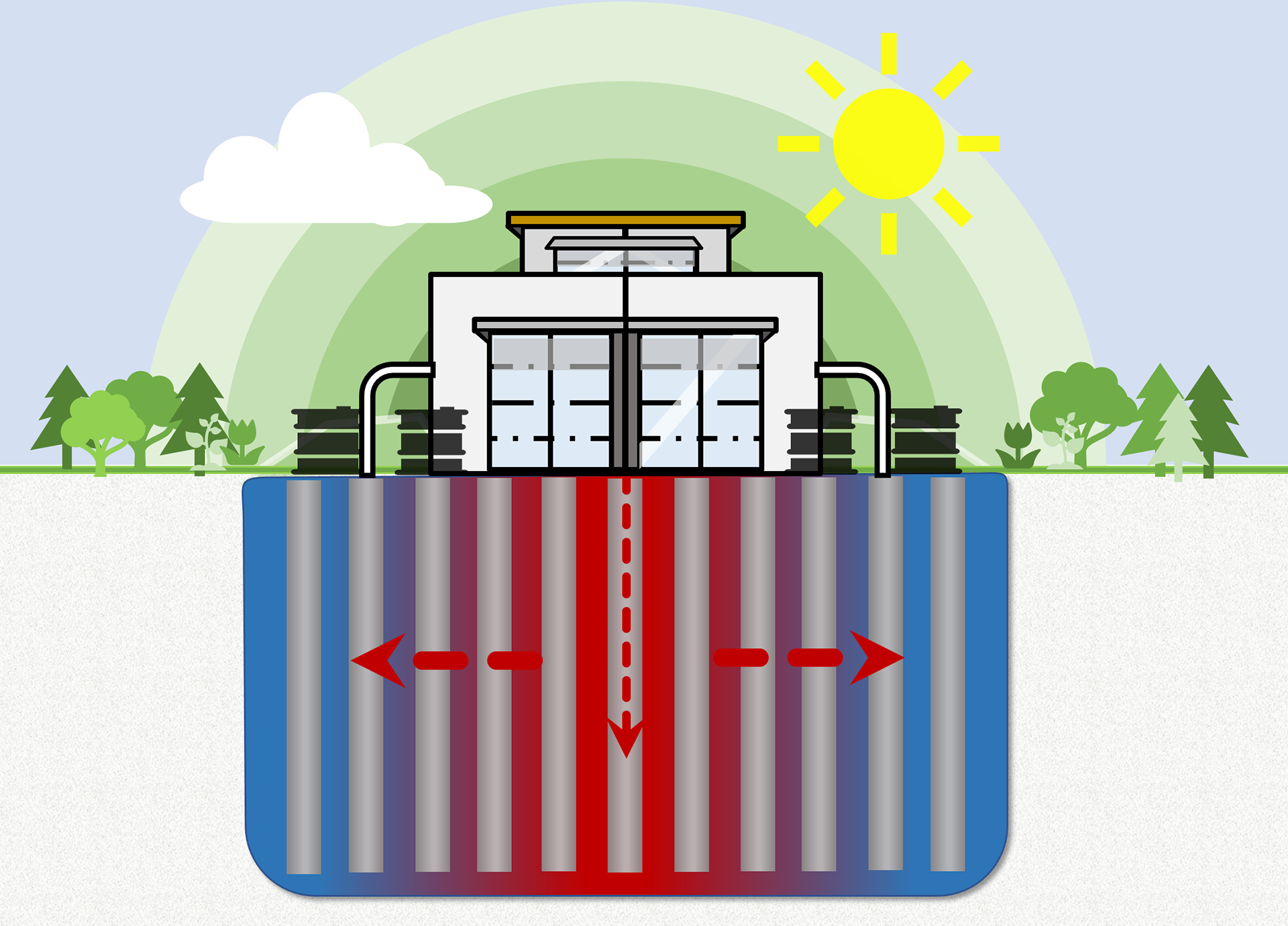 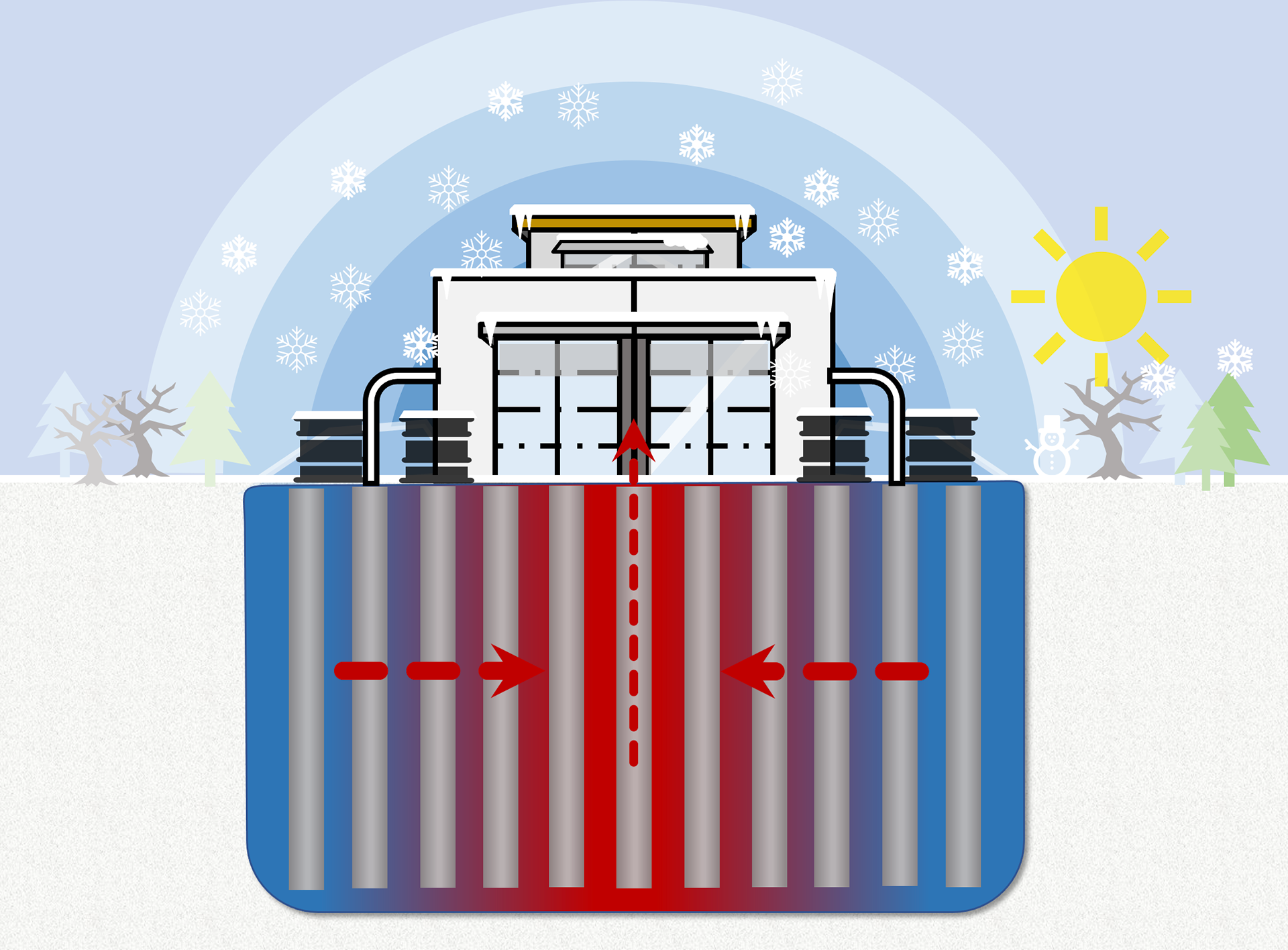 The heating and cooling demand graph depicts Dartmouth's seasonal heating imbalance (bottom left) while the load duration curve illustrates the campus heating demand for every hour of the year (bottom right), which is currently met by burning no. 6 fuel oil. Our framework refills the load curve with low-carbon technologies; reducing total demand through building efficiency retrofits, meeting base load with non-combustion technologies, and saving combustion for peak heating. 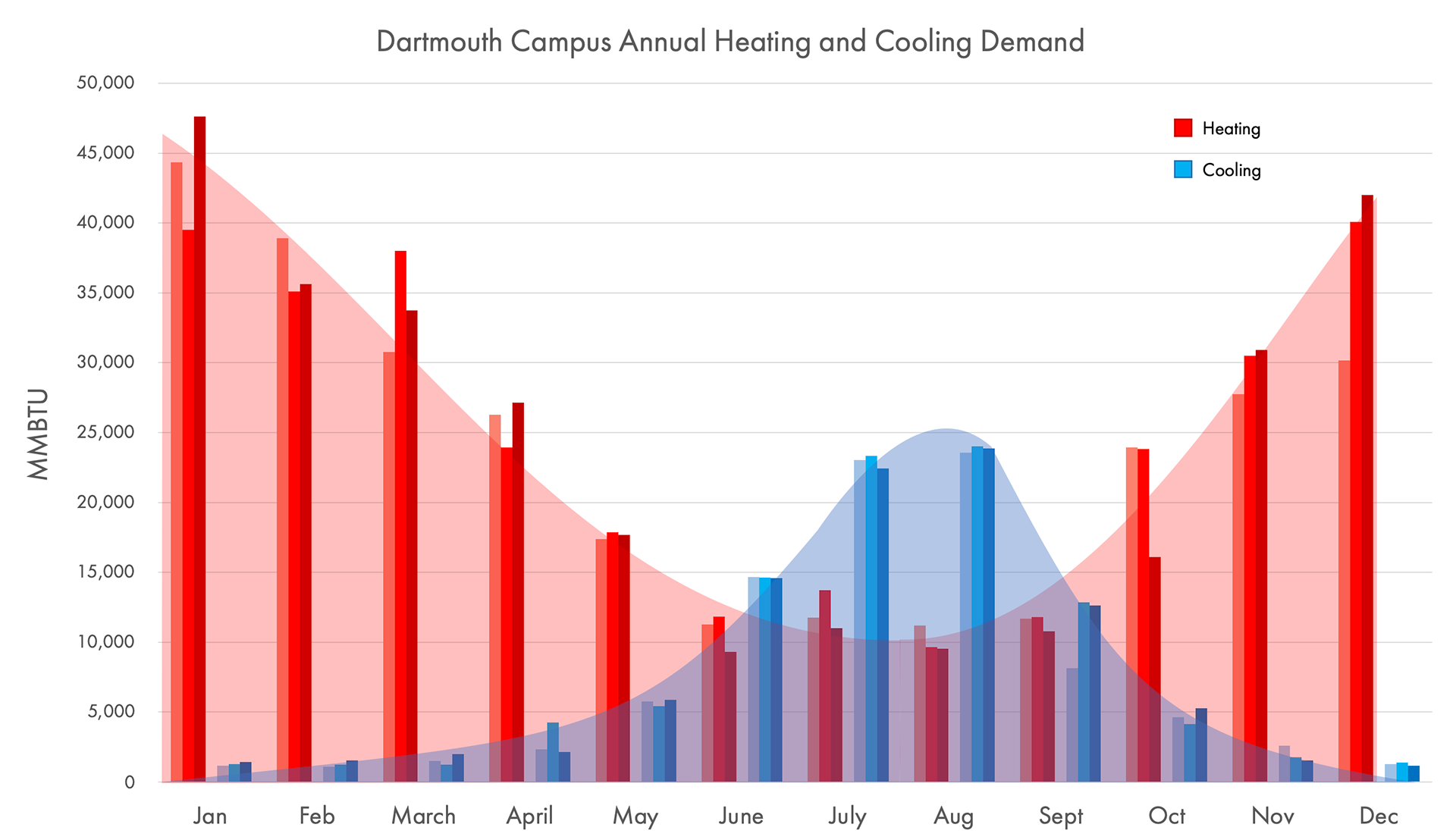 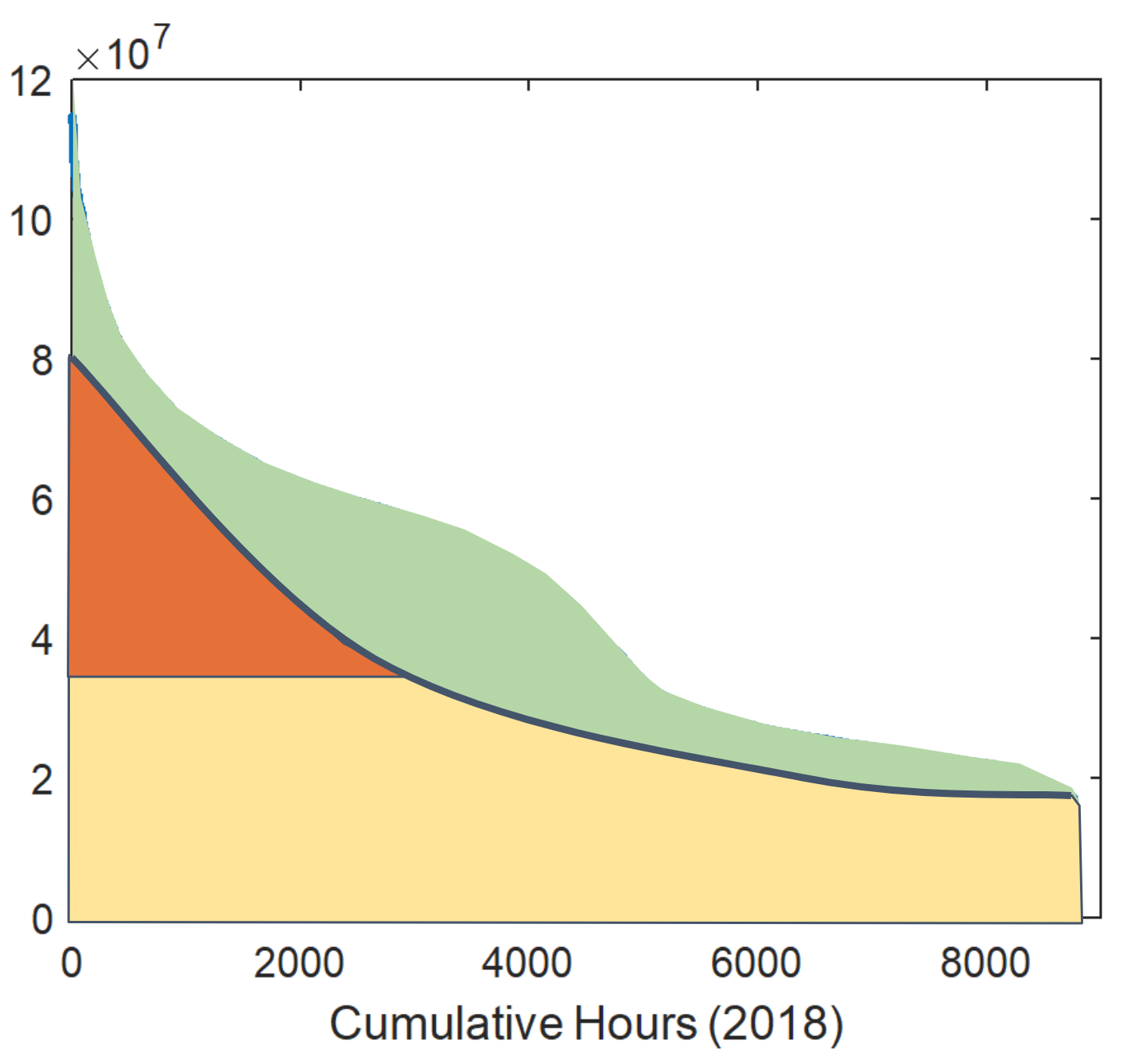 The data from GSHPs and other alternative technologies research (Building Efficiency, Solar Thermal, Air Source Heat Pumps, Biomass, Biocrude, Biodiesel), were normalized to their emissions per unit of heat output, as well as their levelized cost of energies (LCOE) which is the total capital and operational cost over the lifetime of heat generation. Once consolidated, in addition to hourly heating, seasonal solar irradiance, and other initial conditions, the data was input into a nonlinear MatLab optimization function that aimed to minimize costs while supplying Dartmouth's heat demand for each hour of the year, essentially filling the campus's load duration curve. The objective function in $/year, used a weighted sum of capital, operational (electric), and carbon costs. Each iteration of the function tests different combinations of technologies to find the optimal distribution of technologies. The final recommendation projects carbon emissions of 9,450 metric tons, which meets Dartmouth’s 2025 and 2050 emission goals. It also meets the requirements for a 15-year net present cost (NPC) that is lower than business as usual, and this NPC also improves even further when considering longer time horizons. 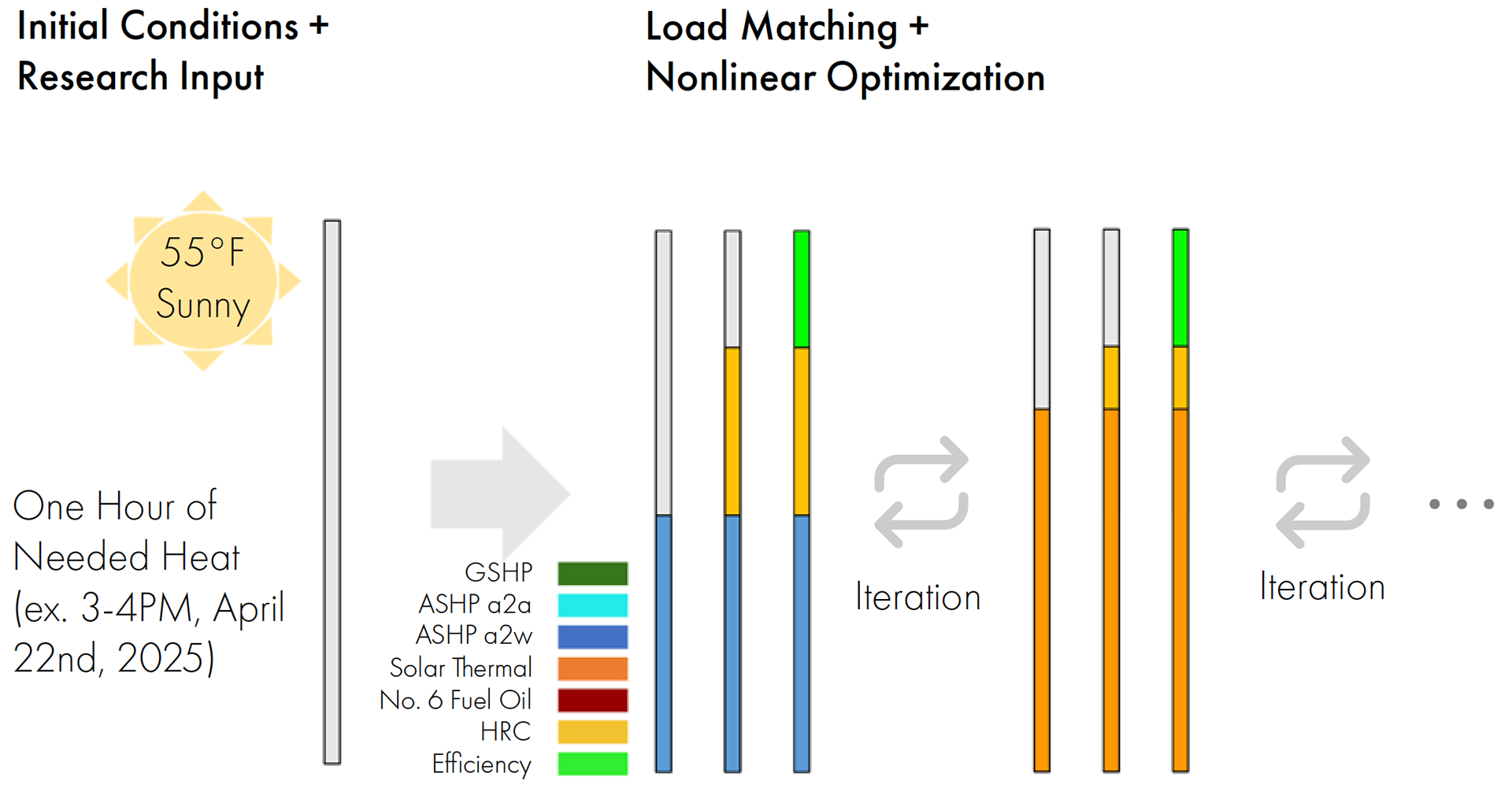 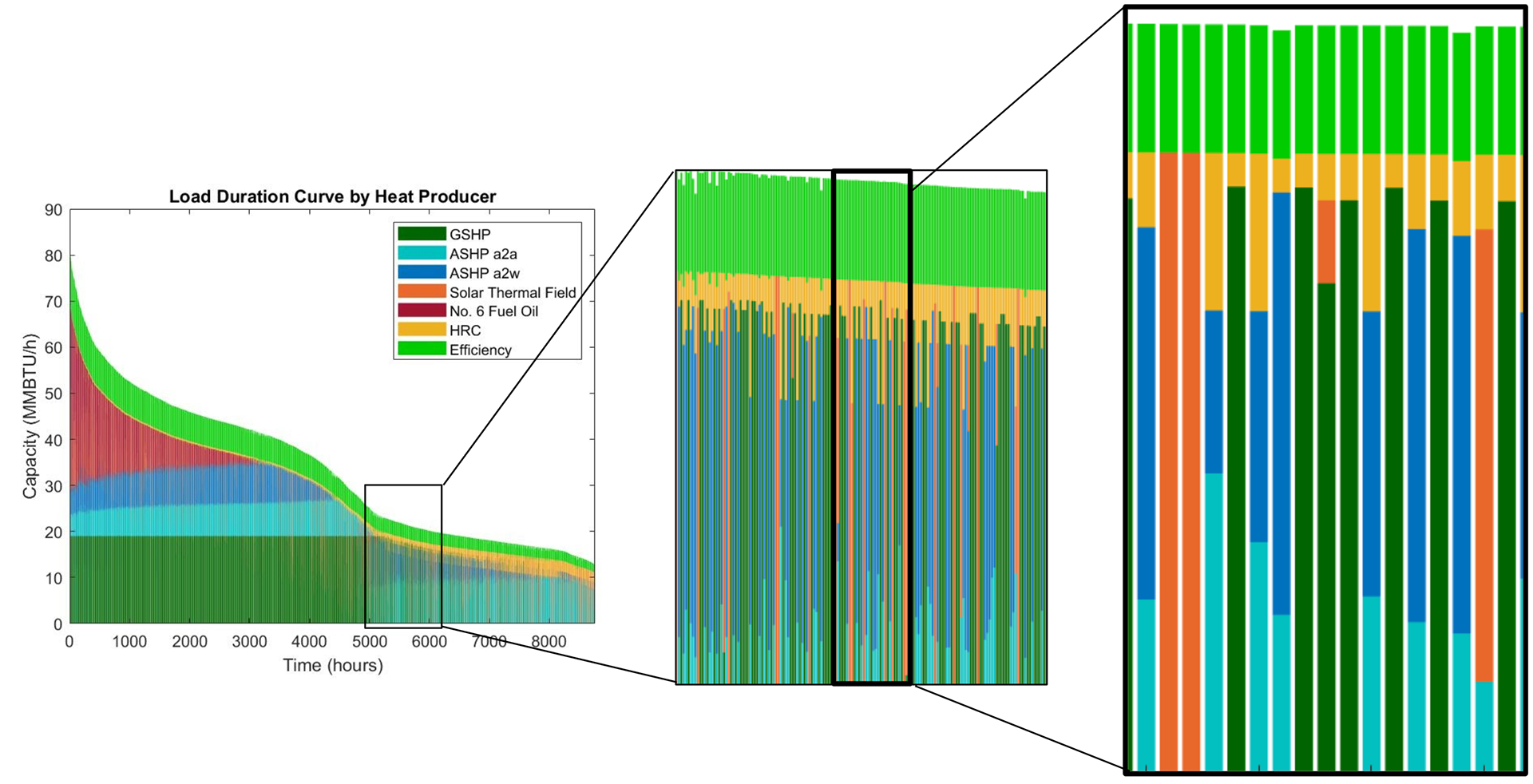 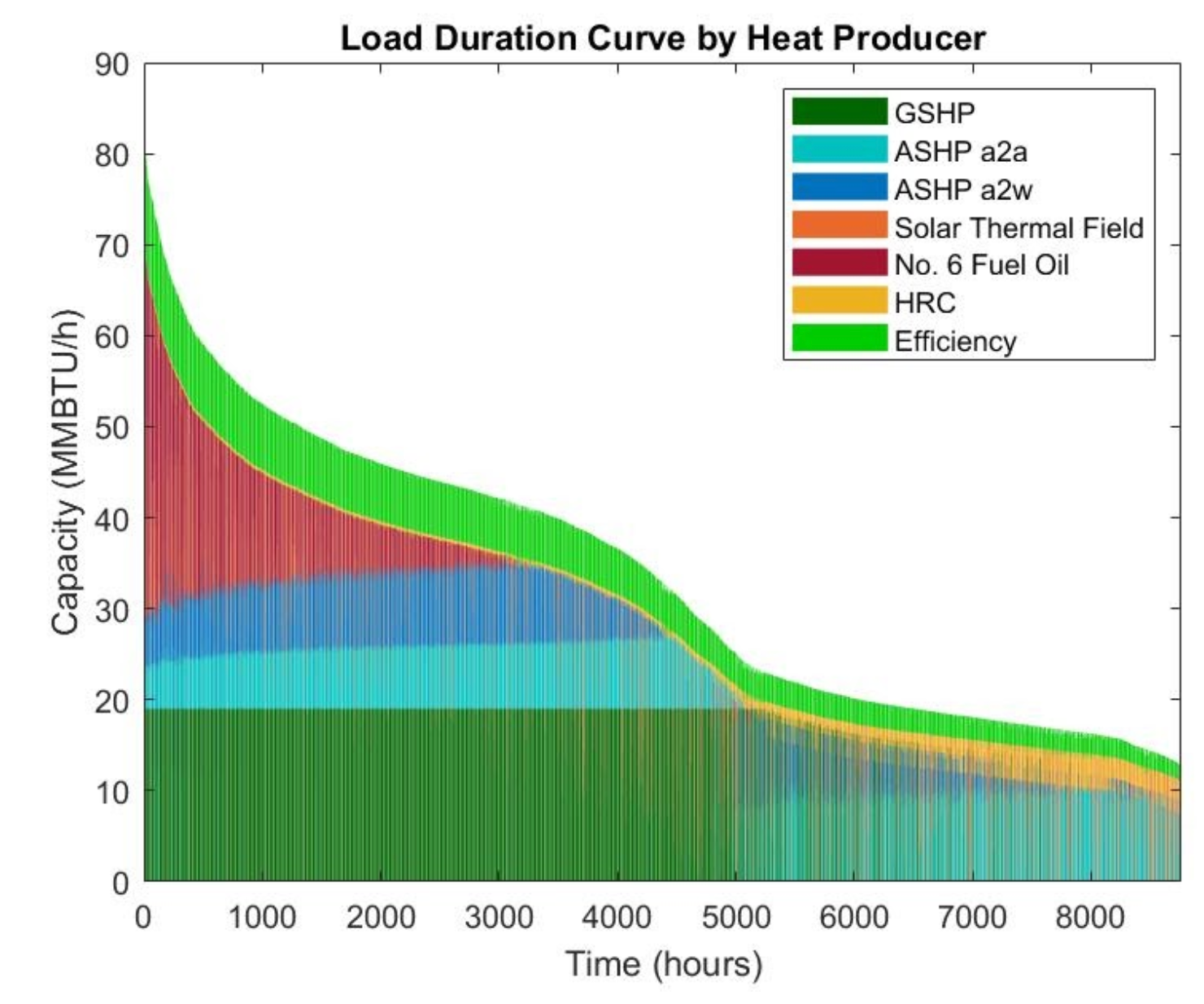 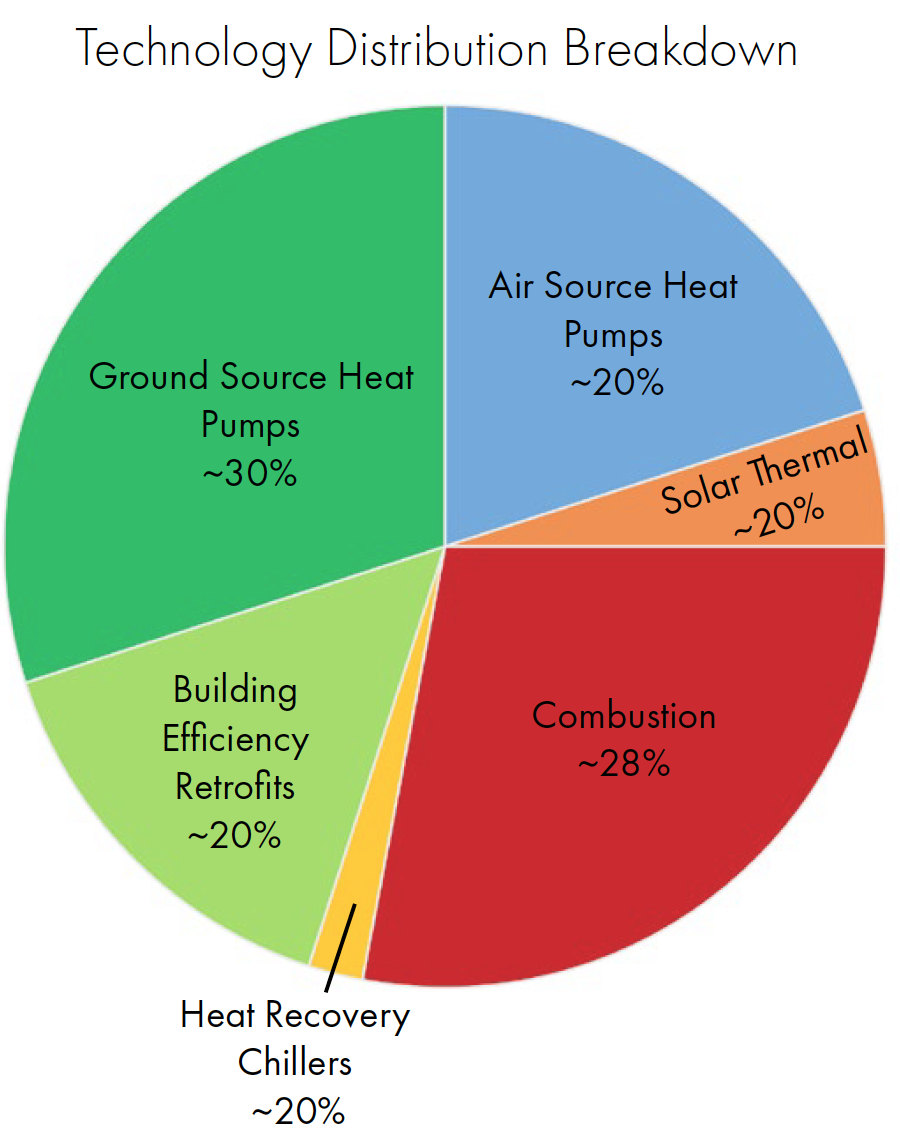 The geothermal facility (far right) has HRC technology integrated with GSHPs and also includes a borefield and solar thermal array. This supplies the chilled water loop (blue loop) in the summer as well as baseline heating in the winter. Since the geothermal facility is not sized for peak heating, it will act as a preheat for the new low-temperature hot water distribution system (red loop). Building efficiency measures and air-source heat pumps will be installed on a per-building basis. The heating plant (far left) would burn no. 6 fuel oil (or any other alternative) to heat the incoming hot water return loop, before redistributing it to campus. Currently the heating plant produces steam for electricity co-generation (yellow loop), and this will eventually be replaced with purchased electricity as combustion demand decreases and the old steam distribution system is removed.